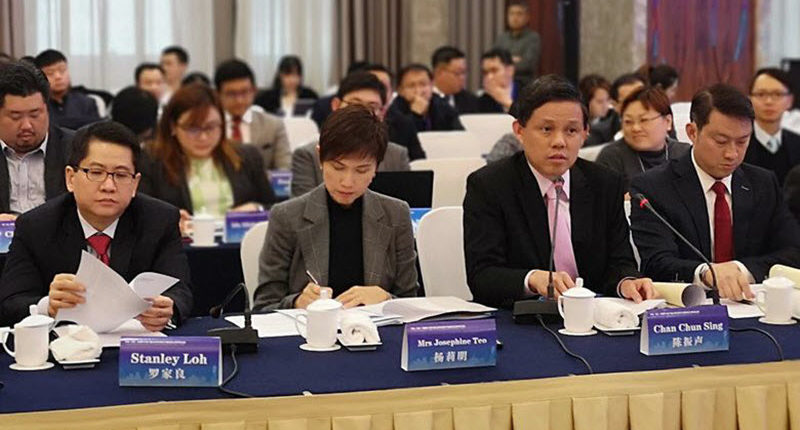 Trade and Industry Minister Chan Chun Sing has urged officials from Asean to consider using a new land and sea trade corridor linking western China to South-east Asia, as it is faster without costing more than the existing route via the Yangtze River.

This opens up tremendous opportunities for new products, including perishable produce, he said at a forum on the new trade route held in Chongqing on Tuesday (Jan 8) .

“As we build up economies of scale, improve our rail links, we must similarly also improve our cold chain capabilities and shipping frequencies,” Mr Chan told an audience of government officials and businessmen.

He is confident that as more work is put in, the costs of bringing goods from South-east Asia to western China will be further lowered.

The new trade route is a network of railway links from western China to Qinzhou port in southern Guangxi, which further connects to South-east Asia via sea.

It extends from the Chongqing Connectivity Initiative (CCI), a joint project between China and Singapore that aims to spur the growth of China’s less-developed western region through better transport, financing and data connectivity within the region, as well as between the region and the world.

“The more partners we have, in terms of companies, provinces and countries, the greater the benefits,” he said.

The participation of Asean countries in the forum is a clear demonstration of how both Singapore and China intend to continue to expand this network, he added.

A total of eight Chinese provinces and autonomous regions have officially joined the network, including four – Qinghai, Xinjiang, Ningxia and Yunnan – announced on Monday.

Mr Chan also outlined Singapore and China’s common belief in bringing benefits to their people through greater integration as opposed to protectionism.

“The free flow of trade, talents and factors of production allows us to make use of our respective comparative advantages to improve and uplift the livelihood of our people,” he said.

He said the apparent gains from protectionism and unilateralism are short term, yet some believe that it is possible to hide behind artificial barriers to competition to avoid painful and necessary adjustments in the face of technological disruptions.

Success in the CCI project is not just about bringing a better quality of life to people.

“It is also a powerful testimony to our belief in the benefits of connection and integration to bring out the best in each other and to leverage the best from each other,” he added.

Mr Chan is in Chongqing for a two-day visit ending on Tuesday. He will co-chair the 4th Joint Implementation Committee meeting for the CCI on Tuesday afternoon before returning to Singapore.