Opportunities beyond the coastal provinces in China 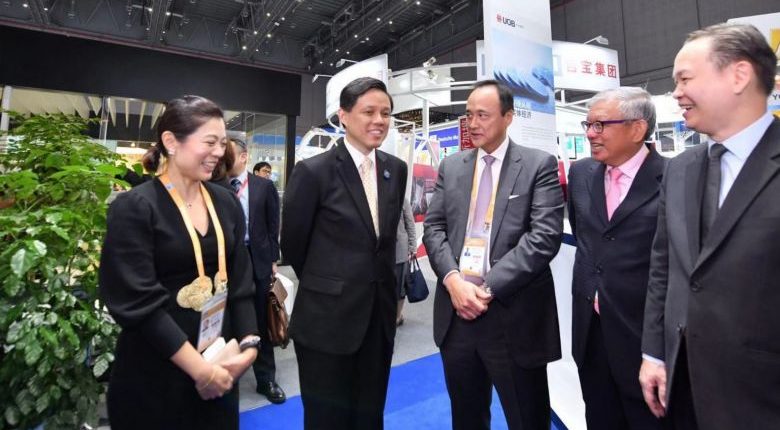 There are still many more opportunities for Singapore companies in China beyond the coastal provinces, such as in the western and central regions, Minister for Trade and Industry Chan Chun Sing said on Tuesday (Nov 6).

He said that the Singapore government is working with the Chinese authorities in many areas to help companies in both countries to partner each other. He cited the China-Singapore Free Trade Agreement (CSFTA) as a mechanism that could help companies lower both tariff and non-tariff barriers to entering China.

Mr Chan was speaking to the Singapore media after touring the Singapore booths in the Trade in Services section of the China International Import Expo (CIIE) in Shanghai.

“The more they (the Singapore companies) come to China, the more they link up with the businesses here, the greater the opportunities,” he said.

He noted that China is a big market, and there are still a lot of opportunities for Singapore companies at different tiers of the market and different stages of development.

He pointed out that both countries are also working together to make it easier for Singapore and Chinese companies to collaborate.

One way is to work out a mutual recognition of each other’s standards, for example in the field of professional services, he said.

“It is very useful for both countries to have this mutual recognition of standards, how we can better integrate our systems of customs clearance…in order to facilitate greater collaboration between Singapore companies and the Chinese companies,” he added.

He listed three key things that the Singapore government “really want to do”.

The first is to get more Singapore companies to explore beyond the established cities of Beijing, Shanghai and Guangzhou.

The other is to attract Chinese companies to go to Singapore and use the Republic as a platform to explore the markets in Southeast Asia.

And the third is for Singapore and Chinese companies to work together to explore third-party markets.

Earlier on Tuesday, Mr Chan also spoke at the Singapore-China Trade and Investment Forum, an event on the sidelines of the CIIE, and witnessed the signing of three business deals in logistics, agricultural commodities trading and metal minerals.

The first two memorandums of understanding were signed between PIL Logistics, a Singapore based logistics provider and the local authorities in northwestern Gansu province, while the third was between Trafigura Group, a commodity trading company, and Baiyin Nonferrous Group, a Gansu state-owned enterprise.

At the forum, speakers from government agencies and private sectors from Singapore and China discussed trade and investment opportunities in both countries.

More than 350 government officials, business leaders and entrepreneurs from both countries attended the event.

On Tuesday afternoon, Mr Chan attended the official opening of the China headquarters for Singapore bank, UOB, before ending his three-day visit to Shanghai and returning home.